I am Praysing the Needle!

After admiring the Needle’s Prayse designs for years and actually kitting up one, I kitted up another (for a good reason) and got it going. Virtue Outshines the Stars has a copyright of 1984, which was in the early days of the current reproduction sampler movement. I’ve completed the top border of Queen Stitch flowers and the upper alphabet of Algerian Eyelet letters and numbers (including an ampersand!). There is a Queen Stitch in the middle of each grape. The colors are so soft and pretty. I’m stitching it on Zweigart cream 32-count Belfast linen and it’s taking up the full fat quarter of fabric.
And it’s one of the 100 Legendary Samplers made up some years ago, though I really think that list should be updated. 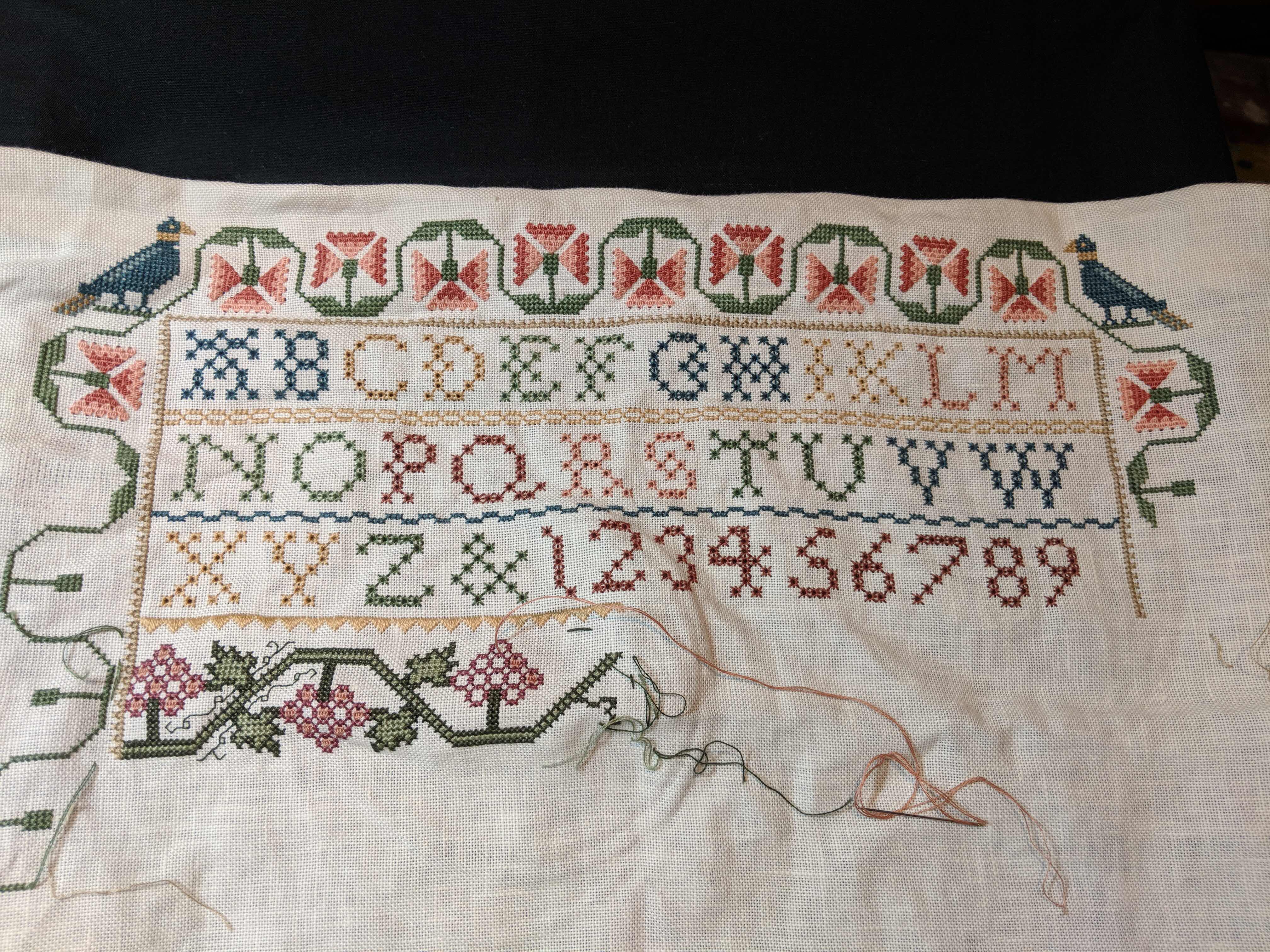 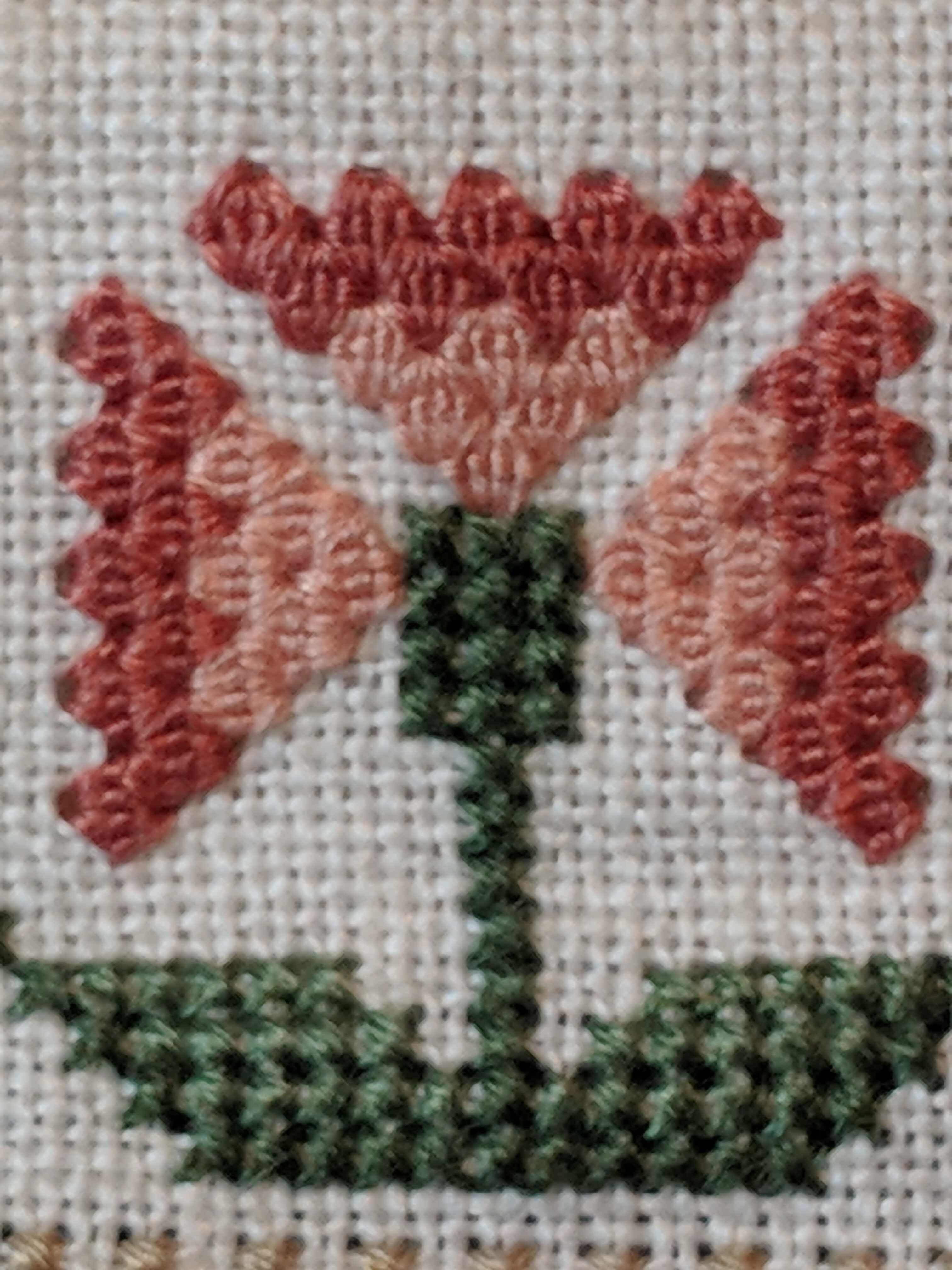 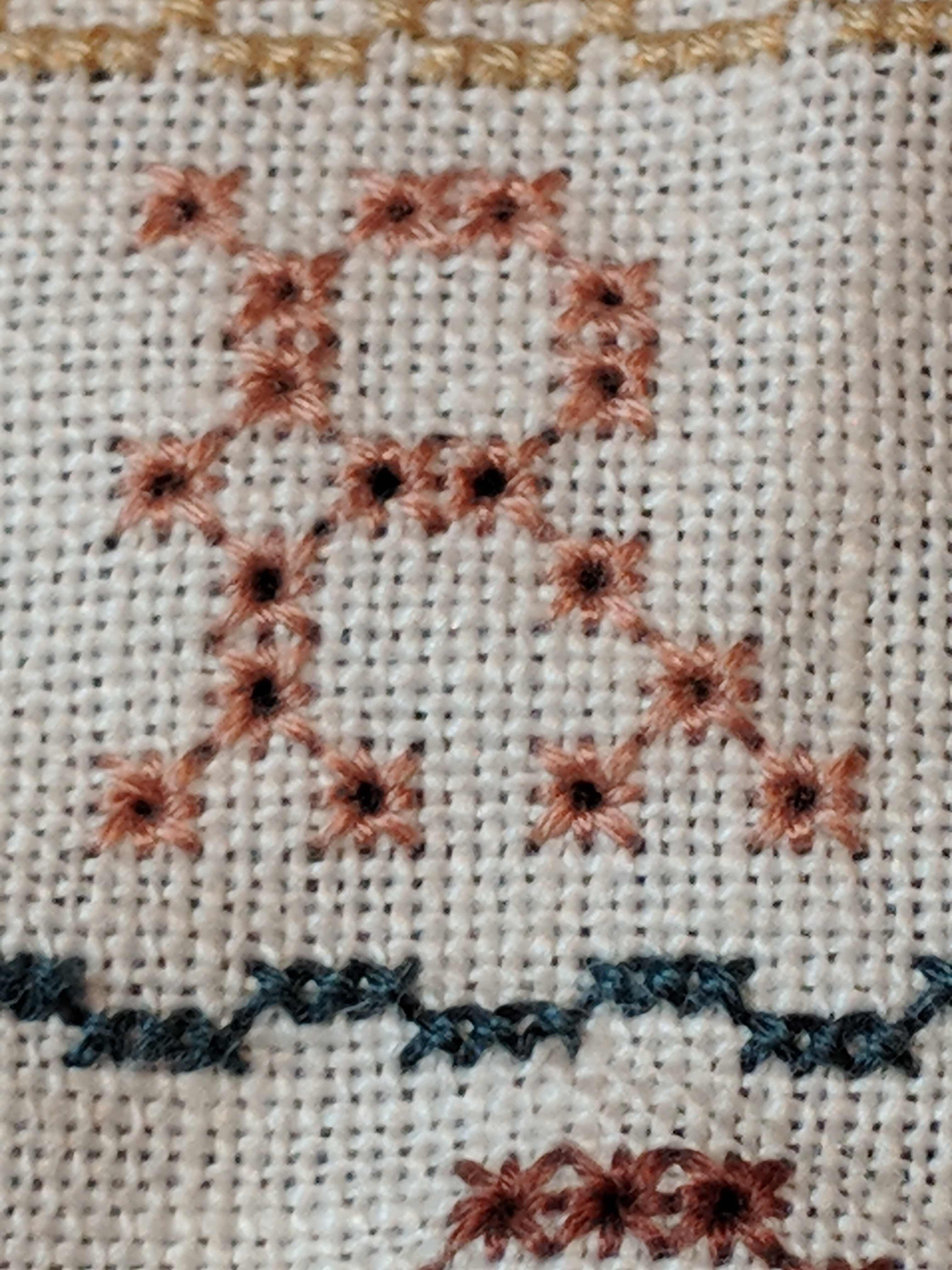 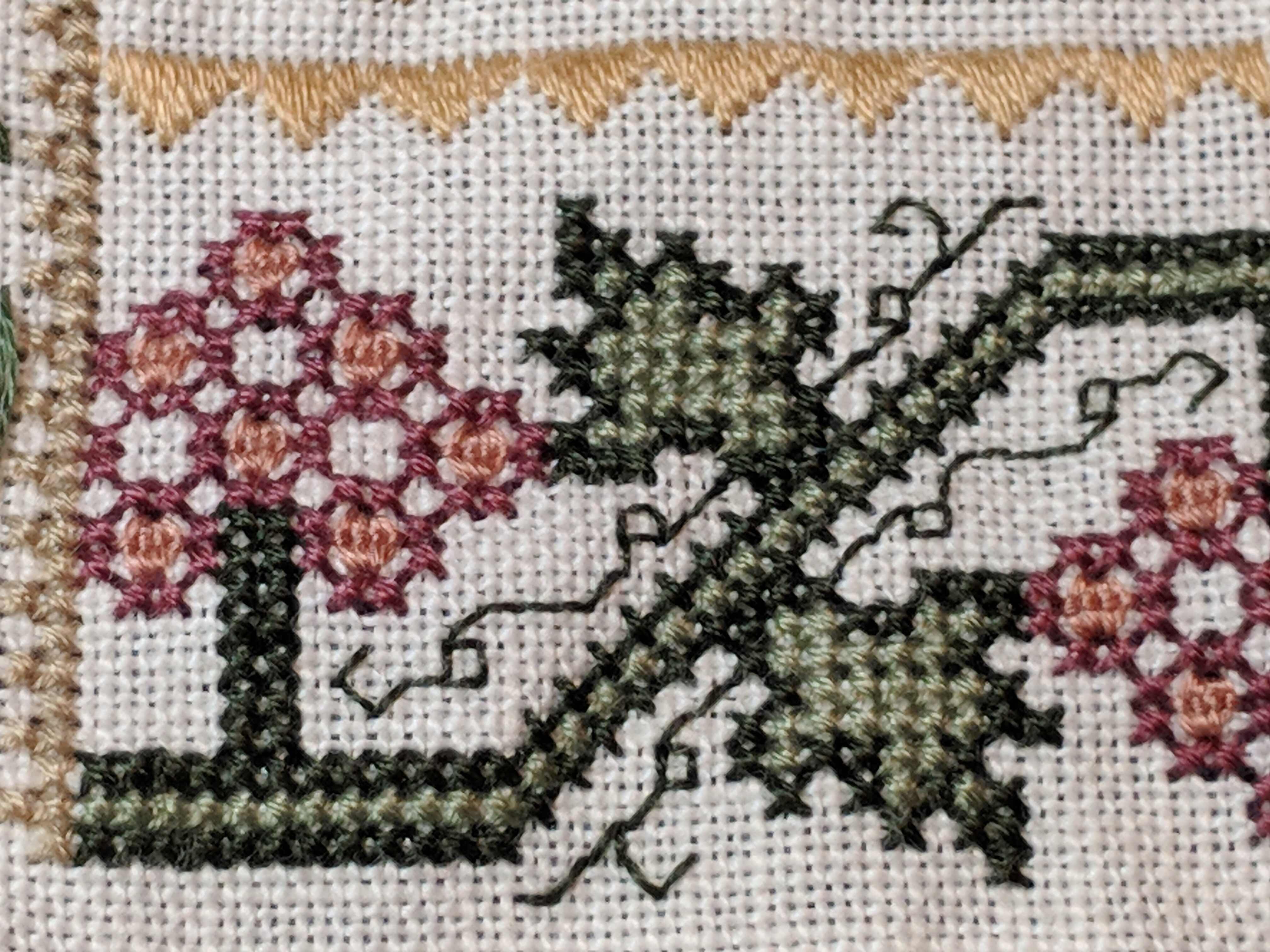 Because of the age of my pattern, there was one funny little quirky problem. Do you see it? 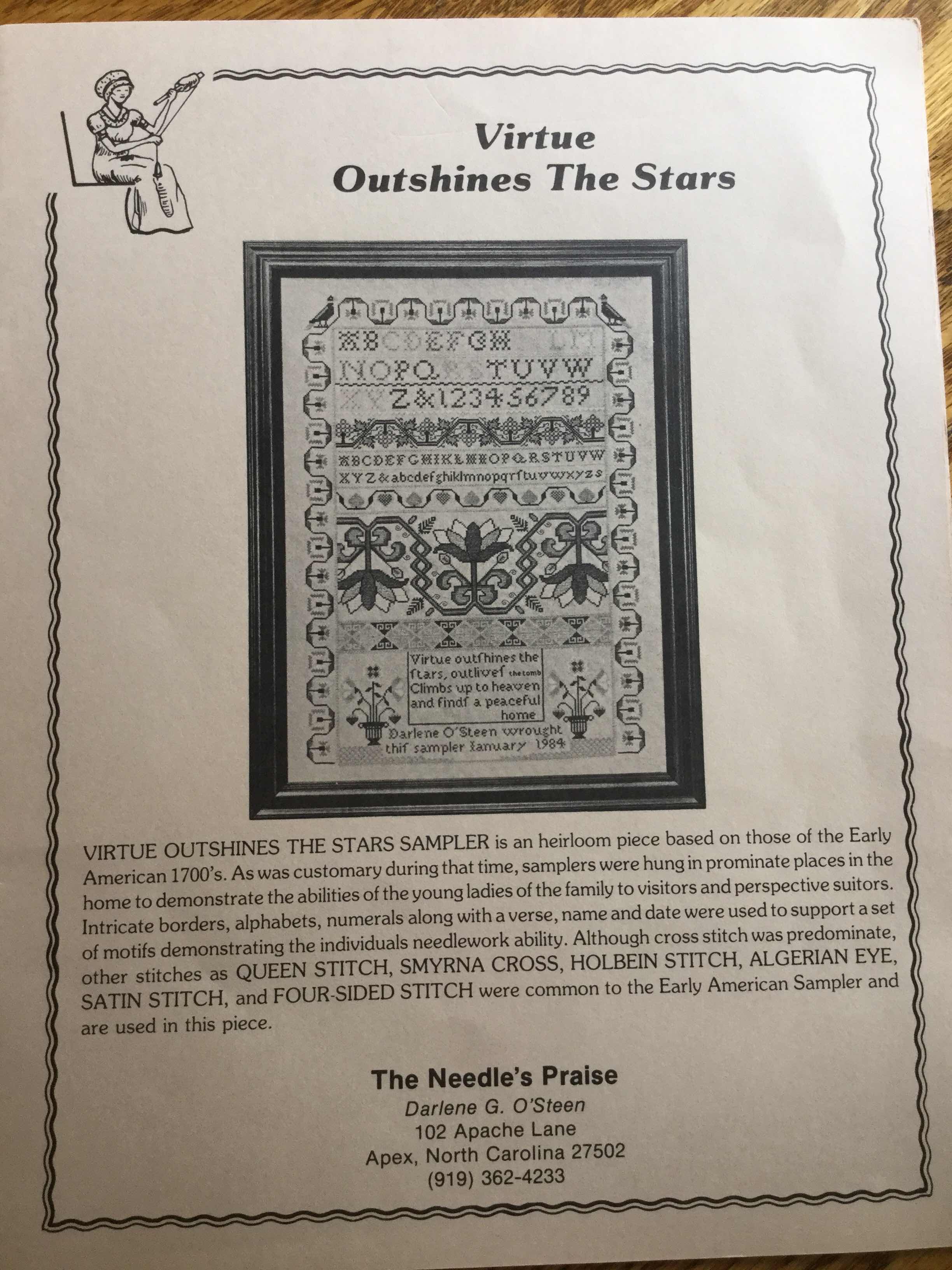 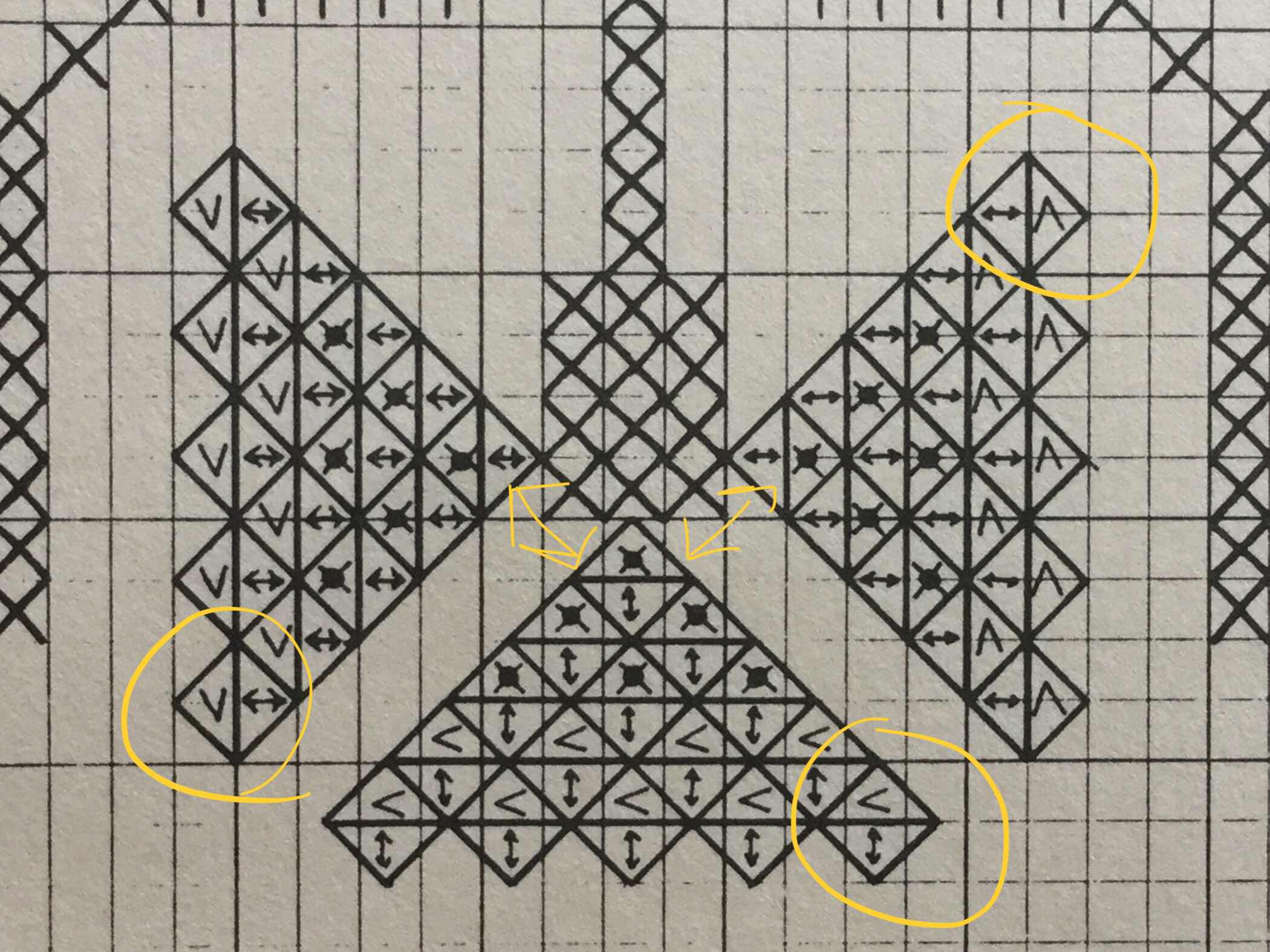 Yes, the original pattern was published in black and white. Notice the symbols on the flower. The inter stitches are all the same color. What about the outer stitches on the flower. What color are THEY supposed to be? Because they are right next to each other on the Color Code, I decided the designer meant 758 (the orientation on the next flower pulls that into play) and it looks good. But truthfully, we can change anything we like on our own pieces.

And why didn’t I start the pattern I’d already kitted up? It’s the Cranberry Sampler (also on the legendary sampler list above) kitted in silks, which means it has to go on scroll rods. I wanted a project I could do on a hoop, which means it has to be washed and ironed and that means cotton floss. A trip to Joann’s with a coupon and linen out of my stash and I was ready to start! I did have a recent conversation with a teacher recently about the washing silk thing and she told me that many silks will survive washing. She suggested that I test it by stitching some of each silk onto a piece of my fabric, wash and iron it as I normally do, and check for bleeding. She does that herself. This makes silk thread more attractive to me since I feel quite strongly about being able to wash my piece when I’m finished. Hmm....

I have been making up a list of projects for this coming year. I’d like to say the list is firm but I know from experience that I’ll find new projects or get enamored of an existing project not listed so let’s call this list, hmm, “flexible.”
To Finish:
Diamond Eyes by Threedles. Kurdy Biggs loves geometric designs and includes lots of “Hilton” stitches.
More Than a Rose by Melinda Sherbring. This EGA Group Correspondence Course is one of the reasons EGA membership is worth every dime.
Ambrosia Honey is another EGA project SAL at https://www.facebook.com/groups/486902244995324/
To Start:
Love and Laughter by Amaryllis Artwork. I could find no trace of this online, I acquired this kit through as an EGA chapter project a few years ago and have wanted to start for a while.
Angel of Dreams by Hanky Panky Hardanger designs.
Sampler Santa by the Needle’s Notion.
I’ll also be taking two workshops this year, one for Star Dance by Margaret Bendig and Nine-Patch Tray by Terri Bay, so that’s a lot!
I’m also the programs chair for Baldy View Chapter of the EGA, so I’ll be busy. In the meantime, I’m trying to finish up some projects to enter into the
Stitchers Showcase this coming spring.
Posted by California Housewife at 7:50 PM No comments:

And They Sinned by Examplar Dames

It's raining here in Southern California, one of those hard end-of-drought storms that part of the drought/fire/flood cycle here, so sitting in my recliner listening to the rain while I stitch is the definition of cozy.
I finished Sampler au Bouquet by Jardin Privé. 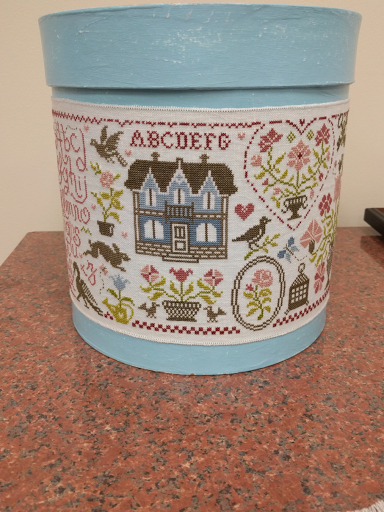 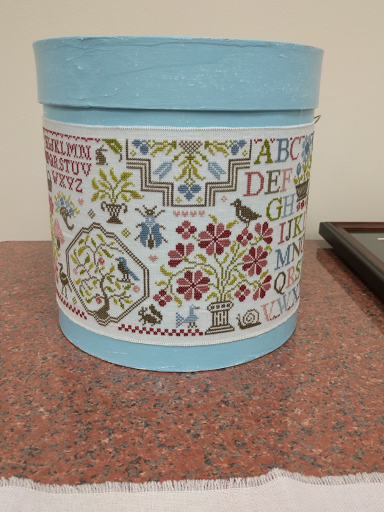 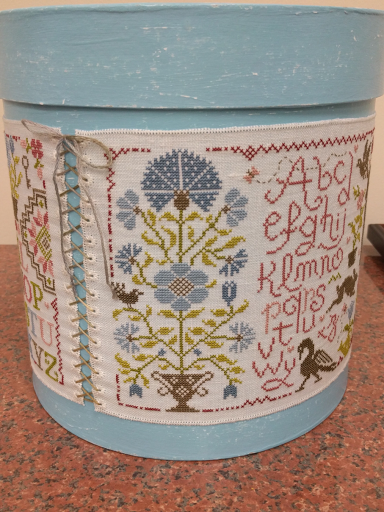 I found a paper maché barrel, painted and varnished it, stitched a line of eyelets on each end of the sampler, and laced it on with pearl cotton. I like the way it turned out!
A few weeks ago I started stitching on And They Sinned by Examplar Dames. I'm stitching it on Flax Fields 36-count linen with the recommended Gentle Art Sampler Threads. Here's what I've done so far. I'm really enjoying this! 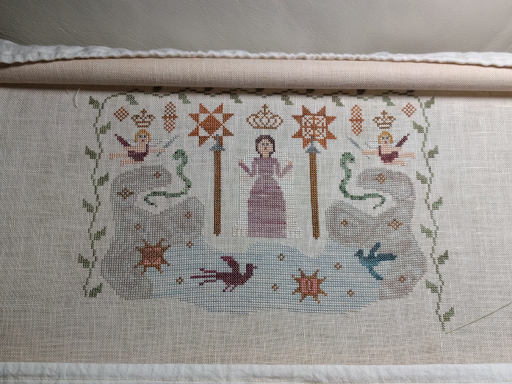 Posted by California Housewife at 10:41 PM No comments:

Sampler au Bouquet by Jardin Privé is being stitched by a group on Facebook. It's officially part of my rotation along with the Butterfly, but I'm liking this so much that I'm pretty much just stitching this. So much for a rotation plan.


I have a start on the alphabet on the right side and those lovely dark pink flowers. Another stitcher on the SAL is doing her piece on hardanger and the colors really pop much more than on my linen.

I got interested in this project because of two finishing photos that people found on the web. They are both so pretty. Remember, click on a photo to see it larger. It's so fun seeing different finishing techniques. It really comes down to using a handle. 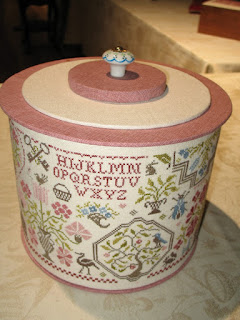 This finished piece is from http://carpentrasbrode.over-blog.com/article-sampler-aux-bouquets-101508974.html

So pretty, so pretty. Imagine this with a glass handle, or even a big 'ole glass doorknob kind of thing. 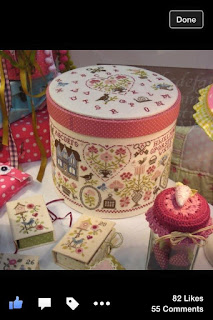 This is really great, too. More stitching for the lid, but a beautifully done piece. Like a shaker box done just right.

I am trying to do some posting using an app on my iPad, and I've just discovered that it does NOT do well with photos, so sometimes my posts are a bit awkward-looking. Oh well.

I have finished my band 1 on my Butterfly, also known as the Heritage Sampler Club from Nordic Needle. 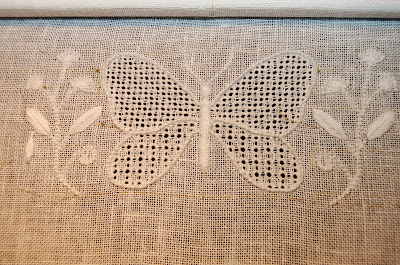 It's really pretty! I've photographed it against a black background so that you can see that I've done a pretty good job of not carrying threads. And that little hanging thing from the leaf on the left branch is a butterfly chrysalis. Click on the photo to make the photo bigger. 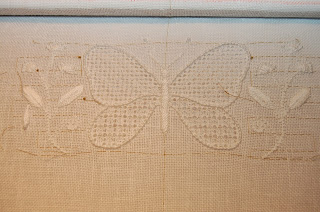 Here it is photographed against a white background. When I was nearly finished with the right branch, I realized that both sides didn't match and I couldn't find the mistake. I ended up ripping out that entire side, basting along both sides for reference, and then stitching the right side NOT from the chart but by mirroring the left side. It turned out that there were two problems. I had made an error, but the chart for the right side also has an extra backstitch on one of the stems, essentially doubling my error.

Here is a picture of that coral knot edging on the butterfly. First the outline is backstitched and then restitched with a series of knots for extra texture. It is these little extras that give needlework dimension. Because of the twist in the thread, I had a terrible time working out of the body toward the right or clockwise. I just couldn't avoid bad knots. I found that working counter-clockwise was much better.


I also realized that I didn't talk about my setup for this project.

First, I chose a roller frame because, unlike stretcher bars, I only have a small section of the project to deal with at any time. I usually don't bother to lace the fabric to the sides but Linda Driskell tells you to do so. When doing pulled thread work, keeping the fabric under both vertical and horizontal tension allows for a better, more consistent pull of your stitching thread and better control of the fabric thread distortion, which is how you get that pretty lace appearance on the butterfly. 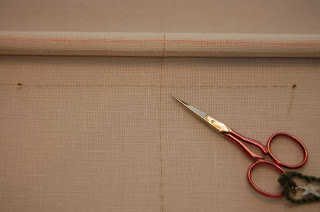 First Linda had me run a basting stitch down the center of the fabric. This is a symmetrical design so having that center line will be really helpful. I then basted another line down a few inches to set the top of the design. 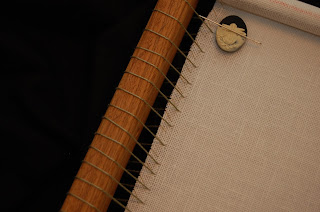 I then used the velcro attachment roller bars from American Dream Products because it is really fast and easy to get the fabric straight. I used pearl cotton to lace up the sides. I don't have drum-tight tension at all but it is an even tension in both directions.

I have decided to concentrate on the Heirloom Sampler Club aka Butterfly and the Sampler au Bouquet 2016 SAL. I started the SAL a few days early since I had a whole night waiting in the hospital for my daughter to have a beautiful baby boy, Aaron. 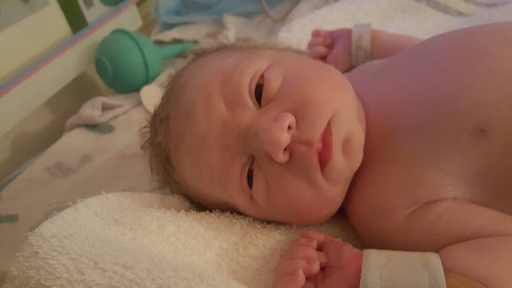 Anyway, on January 1st, this is what my Sampler au Bouquet looked like this: 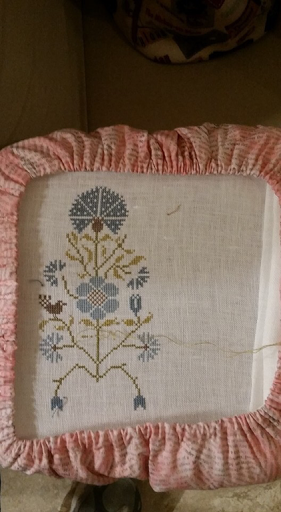 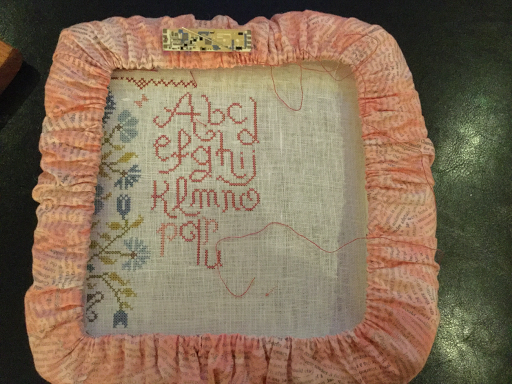 
The designer has you stitch the initials of your name in a lighter pink. I like that! I only stitched a few hours but I got quite a bit done.

So I now have to switch over to the Butterfly for a bit. Here is what I have done so far: 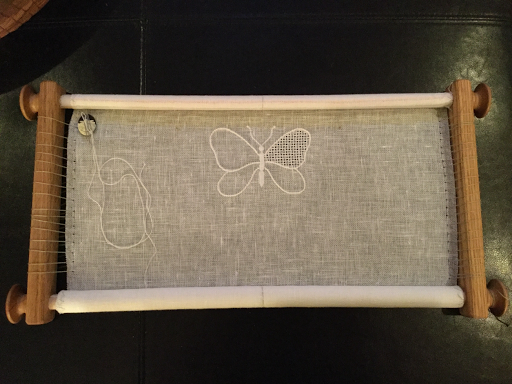 The piece is mounted on a 16-inch scroll frame and laced up the sides to create a consistent tension on the fabric both side to side sad up and down. The butterfly is outlined with a back stitch and then highlighted with coral knots on the top. I like the effect and will try for a better photo later. This piece took a fair amount of time to set up but it will look really great when it's completed.

Here is the project photo from Nirdic Needle.

I should be completing the second band by now but you can see that I'm behind. That's why I've decided to commit to a rotation this year. I love, love, love to start new projects but then I start another one and then another one and the older ones that I still love disappear into the WIP pile. The first half of each month is for the Butterfly and the second half for the Sampler au Bouquet to stay on task. Let this be the year of completion!
Posted by California Housewife at 7:14 PM 3 comments:

It's usually better to have a plan. Going by my stash, my plan is to stitch 24 hours per day for 365 days.

My stash is a big fat liar.

My sadly genuine plan is to start a formal rotation on the pieces I want to complete this year. So what would I like to finish? 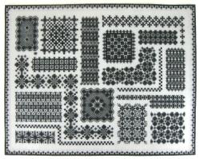 This is through Nordic Needle as Heirloom Sampler Club and so far it's pretty fun. I took one of Linda's last classes through the now-defunct CATS stitching seminars and she was a wonderful teacher.  I just received part 3 but I'm only about 1/2 way finished with part 1, so I've got to get hot on this. 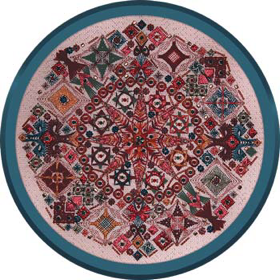 Holy smokes this is beautiful! I just acquired this chart and the colors and threads are amazing!

Ive been working on this on and off for years. I've got the main portion of the bottom central panel nearly done. The challenge of this is actually the size. It's on a big scroll frame and it's awkward to stitch. It's best on that type of frame because I can't wash it, do it will be slow going but it is pretty.

I am looking forward to this.

I've been working on this, again, for a few years. It's not hard but I stitch on it then move to something else. 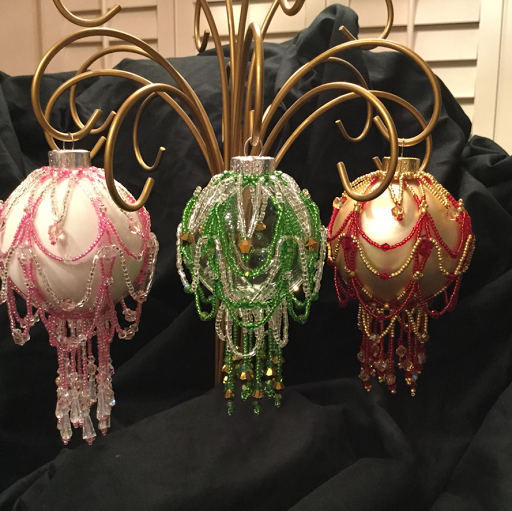 I found a beaded ornament pattern and want to make more. They are beautiful and easy, a relaxing break from other kinds of needlework.

California Housewife
I have a variety of interests, none of which is keeping a current photo.